The boss of Xiaomi Lei Jun spoke and did it openly. The object of his announcement was a new model, only on the main social networks appeared the first rumors of the future Xiaomi MI3S.

Judging by the timing of the announcement and the closeness to the company's annual festival, the phone referred to by the "Leader Maximo " of Xiaomi will be launched the next 9 April. 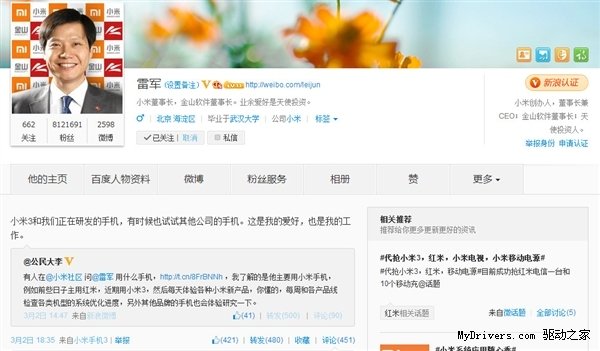 The new device should be an updated version of the MI3 from the Xiaomi MI3S name and will come with more memory, best photo sensors (both front and back) and especially with the support to ultra fast networks LTE 4G. Not all here, in addition to the MI3S should be released in fact the next 9 April also two new versions the Xiaomi Redmi, of which the most powerful would have an 8-core processor.

As with previous releases, even for Xiaomi MI3S and for the two new Redmi sales prices should be 1999 ¥ (about 236 €) for the first and 799 ¥ (about 95 €) for seconds. The Chinese market will obviously be the first to welcome new devices. Singapore, Taiwan and Hong Kong will almost certainly be the next.