Home » News » OFFICIAL: Xiaomi Redmi "For her" coming in May! [Pink & Yellow]
News

OFFICIAL: Xiaomi Redmi "For her" coming in May! [Pink & Yellow]

We are getting closer to the Xiaomi Festival 2014 set for the next. Xiaomi has taught us that in the prelude of an event can be released many beautiful novelties to enthusiast their fans.

In the order we have seen: the presentation of the Xiaomi MIKey, lo Xiaomi MI3 and MITv in Gold and Red, Redmi in White... but now we have to prepare to welcome him Xiaomi Redmi (Hongmi) in his new colors, of the versions that we would define "for her"In Rosa e Yellow.

True, though, the images of these new Redmi had already appeared on the net, precisely on the Weibo profile of the CEO of the company Lei Jun, but the blogs and the main Chinese hi-tech sites had liquidated everything as pure speculation "they will never end up in store stores". And instead…
The official announcement is made by Lei Jun himself, always with a post on his Weibo profile. The Xiaomi offer for the entry-level range therefore expands more and more and after the previous versions of Redmi in Black and Red, on the market we will also sell the two new colors in Pink and Yellow, dedicated exclusively (this at least is the goal) To female audience, nowadays hi-tech addicted as much as men but always endowed with different tastes. 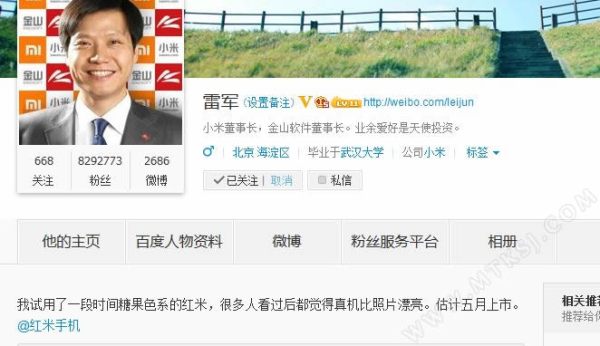 The Xiaomi Redmi to date is sold only 699 ¥ (about 82 €). The new version will therefore not be much more expensive being sold only 100 yuan more, that is to 799 ¥ that at the current exchange rate are about 94 €. On the market however, we will not see Redmi in yellow or red before May!

We address our "rose" audience. Would you buy this new Redmi? And to the men, instead, would you give the Redmi to your woman?

The post OFFICIAL: Xiaomi Redmi "For her" coming in May! [Pink & Yellow] Appeared first on GizChina.it.

Xiaomi, in the TOP 10 of the world's best-selling smartphones in February [with Redmi and MI3]