Xiaomi is one of the Chinese companies most on the crest of the wave. Only two days ago the announcement that certified a record six months, with 26.1 million devices sold, and today another figure that hits the competition like a rock: the sales of the current top of the range Xiaomi Mi3 they have touched the quota 10 million, just 9 months from launch.

September 2013 is a month we will not forget easily: 30 intense days and full of novelty. Oppo, Xiaomi and Meizu presented their devices, Mi3 finally saw the light and was immediately renamed as theThe cheapest device with Qualcomm Snapdragon 800 on the market!

The fact that Xiaomi has announced the Mi3 in Gold version demonstrates how important today is the device for Lei Jun's company. With the expansion process in full swing and i Mi3 prices in continuous downhill, it is natural that a terminal like this attracts a lot of attention from the users. 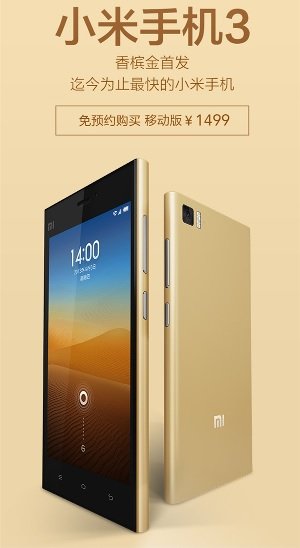 Xiaomi even managed to get in Top 10 manufacturers globally (hitting anything less than HTC). The future for the company is certainly rosy!