With a short tweet on their official account, Xiaomi has announced the arrival of its top of the Xiaomi Mi4 range in LTE version starting from the next 9 September!

Our title is not a deception, Xiaomi will really release the first batch of its flagship with 4G LTE connectivity next Tuesday 9 September. However, at 12.00 now Chinese, the 04.00 in Italy, the company will not distribute the first units of the Mi4 FFD-LTE, which as you know should arrive towards the end of the year, but that in the TD-LTE version. Translated, the version capable of exploiting the high-speed network exclusively in China. 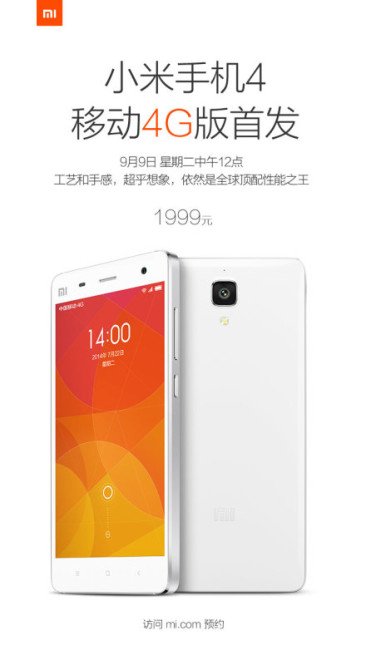 For the record, we inform you that the phone will be available in white with a 16GB memory cut. Unchanged price and hardware configuration; for only 1.999 yuan the Chinese user will have the opportunity to take home a smartphone equipped with Qualcomm Snapdragon 801 processor, 3GB of RAM, 16GB of internal memory, 4G LTE connectivity and obviously an operating system that is the real source of pride for you Jun & co., MIUI 6.

The post Xiaomi Mi4 LTE on the Market Since September 9! Appeared first on GizChina.it.