Listen to the words spoken by Lei Jun, Xiaomi CEO, a generation of Xiaomi-phone with connectivity LTE 4G should arrive on the market very soon. However, we came to know from original documents appearing on the net that the situation at home Xiaomi is not exactly clear. Therefore, more details will probably be released in July, but in the meantime we can hope for better reading the rumors spread by leaker @PunkPanda.

With a message posted on our Weibo profile, leaker revealed the likely top-of-the-range features Xiaomi of 4 ° generation. PunkPanda refers to a body entirely made of metal, with thinner frames, with upper and lower sections, and overall lines designed to make the phone more comfortable in your hand. 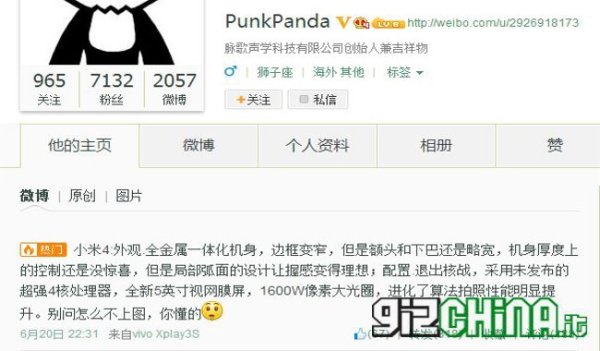 At hardware level, however, the device should be characterized by a four-core super-processor (the "Nvidia Tegra K1?), a display from 5 Inch Retina (what will it refer to with "Retina"?), a rear camera from 16 mega-pixels with an excellent opening (F / 1.8?) and an algorithm specially designed to improve image quality.

We are confident, Xiaomi's quality is unmatched!