OFFICIAL: Xiaomi presents the MI Key. The price? Less than 1 €!

Xiaomi continues to amaze us! On the day of yesterday, the Pechino company officially presented its MI Key, a new accessory that can be used to trigger torch, camera, audio recording etc.

The MI Key is a very simple accessory that plugs into the 3.5mm jack for earphones and will be easily configurable on your smartphone. Activating the camera, audio recording will become even faster but do not forget that having the MI Key inserted will protect the jack's input from dust or anything else that may damage it! 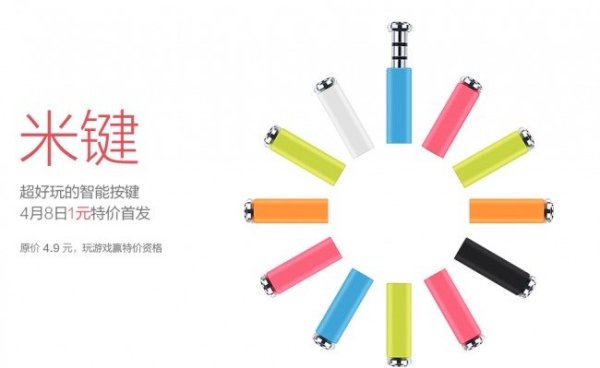 The Xiaomi MI Key comes with several features that are activated depending on the number of clicks. However, the functions are easily customizable, so don't worry. If you are interested, set the date: on April 8 in China, MI Key sales will officially begin at a very low price, only 4.9 ¥ (about 0.60 €). Do you think you have already seen something similar to the Xiaomi Mi Key? Well, you are not wrong! Mi Key looks a lot like Pressy, the tool appeared on KickStarter last year but it is not yet affordable and unfortunately in pre-order has a much higher price (27 $, 20 €).
Do you like our posts? Follow us on Facebook, Twitter, YouTube and G + not to lose all our updates!

The post OFFICIAL: Xiaomi presents the MI Key. The price? Less than 1 €! Appeared first on GizChina.it.

where can you buy it?
there are novelties on v6 for nexus 5 and xiaomi tablets ??

For now only on the official website. For the export we will have to wait (not long).
For the V6 there is no news for any terminal, but it is likely that you will have to wait for the first time for the Xiaomi device.