As we anticipated in a post last week, some lucky users will be chosen as beta-testers for the 1 ° wearable device of Xiaomi's story. Not only will these 500 people, this exact number, benefit from the ability to buy the smart bracelet at the symbolic digit of 1 yuan (0.12 euro).

On July 22, a part, albeit minimal, in the audience in Beijing was animated by the desire to see not only the new Xiaomi Mi4 but also the mysterious wearable device that had been glimpsed in the days preceding the launch. Of that bracelet, of which we guessed the name, was presented, it is called Xiaomi Mi Band and is one of the many smart bands that work by monitoring our physical activity, our sleep, our awakening, etc. etc. Its strong point in fact lies not in the breadth of features offered, some of these can only be used with Xiaomi-branded smartphones, but rather in the price: only 79 yuan (about 9.55 euros)! Incredible!

We do not know exactly when Xiaomi will officially launch his bracelet on the market but, if the test period ends really by the end of August, then we could see the Mi Band in China already from the 2 ° week in September. 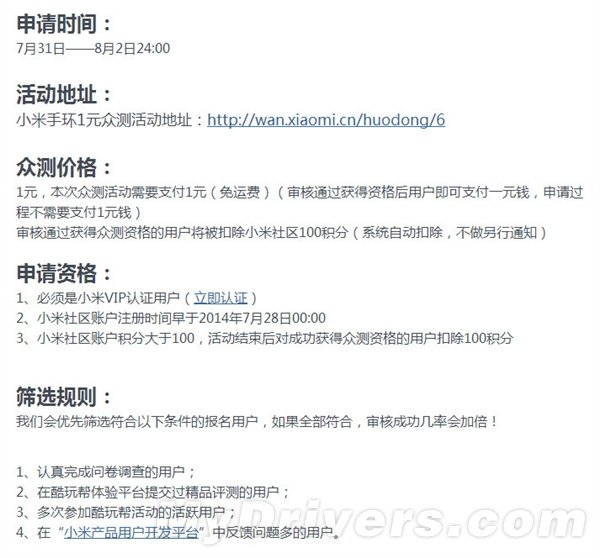 The end is therefore top-secret, but the beginning is not. In fact, just yesterday the company announced that today it would have selected 500 lucky users who will act as beta-tester for the Xiaomi wearable also having the opportunity to buy the Mi Band at the shock price of 1 yuan (about 0.12 euro).