Though the situation in the house Xiaomi on the Xiaomi Mi3S project is still not entirely clear (frankly we find it strange that the Mi3S does not have LTE connectivity), the confusion around the brand does not seem to have influenced sales.

Despite all this, Xiaomi keeps his way back to winning the market right back, reporting it is old Yao's blogger laoyaoba.com on his Weibo profile. According to data released by Yao Xiaomi in the first months of 5 2014 would have reached the monstrous figure of 22 millions of devices sold, an impressive result. In 2013 the total number of devices sold sold to 18.7 million and this year Wall has been abundantly broken before May! 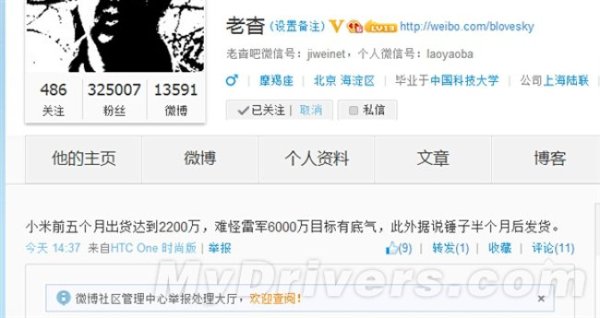 If the number from the Chinese blogger was real, Lei Jun should not be afraid of anything, safely achieving the set 60 goal of millions of total devices in the 2014. To see if in the 2015 the goal of the 100 million will be met, look forward to next year!

The post [Bomb] Xiaomi, in the first 5 months 2014 sold over 22 million devices Appeared first on GizChina.it.